Thirty Nights with a Dirty Boy: Part 3 by Shiloh Walker

Thirty Nights with a Dirty Boy: Part 2 by Shiloh Walker

Blurb : Shiloh Walker invites you deeper into the sensual e-serial Thirty Nights with a Dirty Boy, where some rules are made to be broken…Haunted by her past, Ella Cruise has no desire for a long-term relationship, but thanks to a contract with wickedly handsome bartender and male prostitute Sean Lachlan, she now has thirty nights to live out every fantasy she’s ever had—and more—under the tutelage of a very dirty boy. There’s just one problem: Love was never part of the deal…Read all three parts in Shiloh Walker’s white-hot Thirty Nights with a Dirty Boy e-serial!A HeroesandHeartbreakers.com original novella

Thirty Nights with a Dirty Boy: Part 1 by Shiloh Walker

Blurb : Introducing Shiloh Walker’s erotic Thirty Nights with a Dirty Boy e-serial! Money Can’t Buy Love…Ella Cruise doesn’t like to be touched. A survivor of childhood abuse, she craves security in all aspects of her life: fulfilling work at the nonprofit she runs, more than enough money to live comfortably, and a good friend and confidant. But none of it can ease her longing for intimacy, even if just for a night. When she meets a gorgeous bartender who moonlights as a male prostitute, a bold idea begins to take shape…But It Can Buy a Night of Passion—or Thirty…Sean Lachlan is stunned by the cool beauty’s offer: 30 nights of no-strings sex in exchange for all the money he’d need to start over. The deal seems too good to be true, especially since his desire for her is no act, but Sean finds he can’t turn her down. Before they know it, Sean and Ella realize they’re in deep, their defenses crumbling. Will thirty nights with a dirty boy be enough after all, or will love lead Ella and Sean back to the negotiating table? Read all three parts in Shiloh Walker’s scorching-hot Thirty Nights with a Dirty Boy e-serial! A HeroesandHeartbreakers.com original novella

3rd in a series, written to stand alone

Max “Shame”’ Schaeffer knows only one way—the hard way. He lives hard, drinks hard, fights hard…and if comes to it, he figures he’ll die hard, too. The only soft thing in his life is Charli Steele, the younger sister of his two best friends. He knows she thinks she’s in love with him, but with his tarnished and messed-up past, he doesn’t see anything in him worthy of love.

Dr. Charli Steele knows more about Shame than he realizes, and she has loved him since they were kids—scars and all. He loves her, too. She is sure he does. But Shame will never give in to it. Until one brief, stolen night leads to another…and another. Then Shame decides to throw it all away. Heartbroken, she retreats, intent on trying to heal from this latest rejection. But a phone call in the middle of the night changes everything.

Shame is hurt, and he needs her.

It turns out he needs her a lot more than he realizes. But will he let her in…before it’s too late? 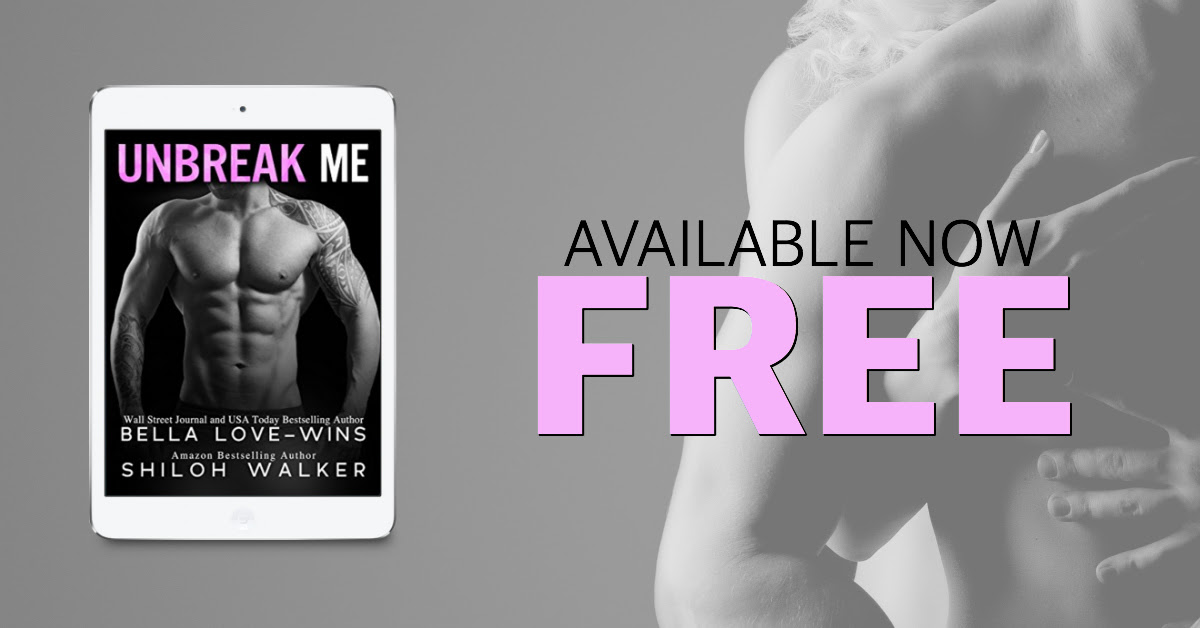 UNBREAK ME by Bella Love-Wins and Shiloh Walker is FREE!
Grab the prequel to Ruin Me now!

Mac
I lived in the eye of a storm. A broken child in a nightmare I could never wake up from…unless I could get away.
But running meant I had to leave everything behind.
Years after I finally escaped, I found her.
She was too innocent, too sweet to turn my back on, and it only took an instant to seal her fate to mine.
This innocent stranger could be my only chance. If I let her in, she was sure to unbreak me.

Be prepared to be RUINED
Ruin Me by Bella Love-Wins and Shiloh Walker is coming on September 26th!
Amazon → http://amzn.to/2vOVZat
iBooks → http://apple.co/2eOJYut
Nook → http://bit.ly/2xgme9l
Kobo → http://bit.ly/2wK9O94
ADD TO YOUR TBR → http://bit.ly/2eJBgdf
Read an excerpt NOW! → http://bellalovewins.com/ruinme/
BLOGGERS SIGN UP HERE → https://goo.gl/forms/B0bCQo5MfEvvvFFz1
Angel
I should know to keep my guard up when this dark, damaged stranger saves me. But I don’t.
His tortured soul draws me in for one hot, sinful Vegas night.
Then I learn what he is.
An irresistible liar.
I should back off, but it’s already too late.
I’ve fallen for the one man who’ll ruin me.
Ruin Me is a full length (64,000 words) steamy standalone romance with dark story elements, no cheating, no cliffhanger, and a happy ever after ending.