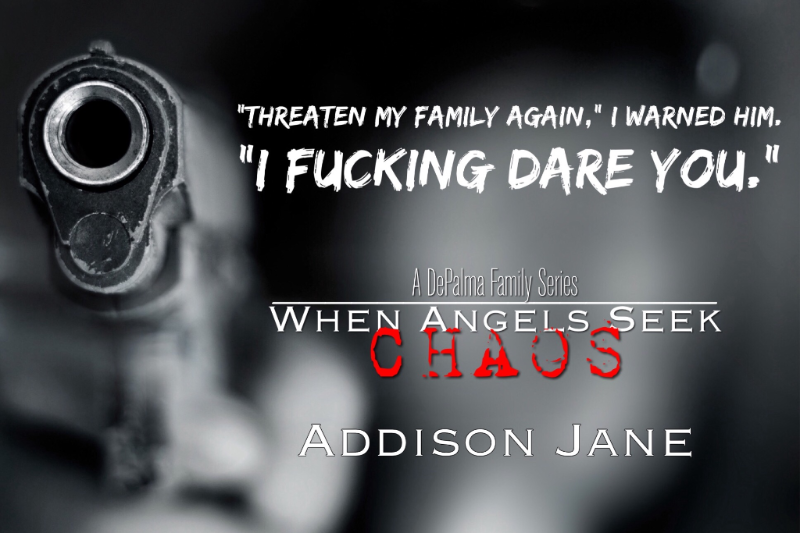 And he was the most beautiful man I’d ever met.

Every bone in my body told me to hate him, to despise everything he stood for.

Angelo Moretti was a man I should have stayed far away from.
When my world was torn apart before my eyes, and I was left vulnerable and damaged, he was sent to protect me.
He was hard.
He was patronizing.
And he was the most beautiful man I’d ever met.
Every bone in my body told me to hate him, to despise everything he stood for.
But I couldn’t.
Angelo lit a fire inside me I’d spent my entire life smothering with obedience and fear. He pushed me further than I’d ever been before, and when I was right on the edge, he dared me to jump.
He offered me redemption and the chance to hurt those who’d wronged me. In order to get that though, I had to take a leap into his world, the deadly mafia empire the DePalma family had created, one filled with drugs, guns, and blood.
I found him in the darkness, but it was there that I may just lose myself.

Addison Jane is a born and bred kiwi girl with a passion for romance and writing.
When she gets the chance she enjoys the little things in life such as reading, dancing, music, and Facebook, but her world really revolves around the little girl who calls her Mum. It’s an awkward balance between alpha males and Disney princesses, but it works.
Growing up on a small farm next to the beach will always make her a country girl at heart. But since moving away to a small town close to the city, she’s discovered a dangerous love for shopping.
Writing stories has been something that’s come naturally since she was young, and with the massive support of her friends and family, she finally decided to step out of her comfort zone and share them with the world.
She enjoys bringing her books to life with strong female leads, sexy, passionate men and a rollercoaster of twists and turns that lead to the happily ever after that her readers desire.