Cristin Harber, Only, Only for Love, Only Forever, Review

Cristin Harber, Only, Only for Love, Only for Us, Review

Cristin Harber, Only, Only for Her, Only for Love, Review

Cristin Harber, Only, Only for Him, Only for Love, Review 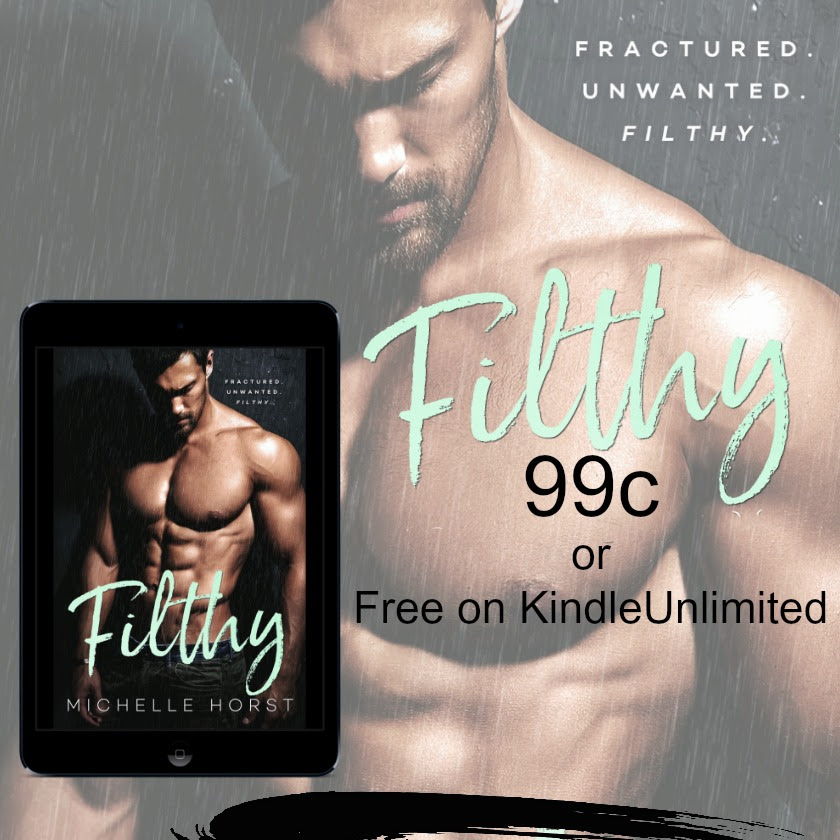 NEW & ONLY 99c!!! Filthy, the final book in the Damaged Romance Duet by Michelle Horst is available now + FREE in Kindle Unlimited!!!

“It’s raw, dark, gritty, highly confronting and at times simply heart-breaking.” ~ Bloggers From Down Under

I’m only good for sex. That’s what I’ve been trained for my whole life. I’m a puppet. I only know how to be your perfect fantasy. It’s the only life I’ve ever known … until him.

I’ve been replaced, discarded like trash. Beaten, damaged, treated like an animal, I’m forced to leave the only home I’ve ever known.

With a warped perception of what life is really like, no dignity, and no one to call my own, I’m on the verge of giving up.

But then he saves me. For the first time in my life I’m given a choice. I can stay and have a purpose again, or I can leave and face the unknown on my own.

Hope. It’s the one thing that kept me going. At first I hoped that I would be the perfect slave, but now I hope to be the perfect woman. He’s my damaged hero.

I want him to see me. The woman. The survivor.

He gives me strength. But all I want is his heart.

My story will make you cry your eyes out. Don’t say I didn’t warn you.

People pay thousands just to have a taste of me.
I have to obey for the sake of my brother. As long as I’m the perfect slave, David remains safe.
A life of depravity and cruelty is all I’ve ever known … until her.

I might be damaged, but I’m not destroyed. I crave revenge for what was done to me. I have a need to kill, to feel their lifeless blood dripping from my fingers.

Freedom. No one is ever truly free. She doesn’t want to enslave me, but damn, I’ll willingly be a slave to her heart.

When my past threatens to take her from me, revenge and wrath burn hot through me.

She’s not just worth living for. She’s worth killing for.

One would think the sassy, sexy hybrid Earthen Protector and Healer Alex Conner deserves some downtime after all she’s been through. But no. Instead, she finds herself trapped by the king of the Fae, and he’s not letting her go until he gets what he wants.

As alternate realities tangle her in confusion and bring her close to forgetting who she is and everyone she loves, will she unwittingly give the king what he craves?

If she does escape, will she ever pick up where she left off with her sexy Adonis Ryan? And can she control the new power she never knew she could wield—one over life and death itself—or will she be entangled in a realm whose ruler is hell-bent on entrapping her and someone she holds dear, forever?

Ms. Sinclair is an American author who writes novels in the fantasy, suspense, YA, & romance genres. Parker gives credit to the development of her imagination and passion for writing to multiple childhood destinations lacking indoor plumbing. It may sound odd, yet when your journey to adulthood consists of numerous backpacking, camping, and hiking trips to the most out-of-the-way and breathtakingly beautiful places in North America, the creation of games, worlds, and characters are the results. She would never trade the childhood her parents gave her, and she thanks them for raising her to have her own thoughts, dreams, and bountiful imagination. Oh and she wishes to thank them for teaching her that one should never leave their jeans on the floor of an everglades campground shower—lest they do the dance of the scorpions in the pants again!

While attending college, Ms. Sinclair studied biological sciences and psychology, specifically animal behavior, but her love has forever been to write. There are boxes in her house filled with notebooks, journals, and logs with poems, stories, lyrics, and personal rants scratched into them with pencil, marker, pen, whatever she could get her hands on. Words demanded to be thrown out of her mind and onto paper by any means necessary. Ms. Sinclair’s studies have contributed greatly to the worlds, characters, and stories she creates, proving that no matter what path you take, it will all be part of where you end up—sometimes in spectacular ways!
Since 2007, Ms. Sinclair calls Coastal Virginia home where she writes full-time, is a member of RWA, a licensed educational counselor, and enjoys quality time with her children, husband, and fur babies.