We are so excited to be sharing this excerpt from Drew Elyse’s upcoming MARKED with you today. This new standalone contemporary romance kicks off the Sailor’s Grave series and will be released May 17th exclusively on Amazon.

“MOVING ON” IS JUST ABOUT ACTING THE PART.

So I let them.
Everyday is about putting on a face,
pretending to get over the loss of my husband.
And every day is a lie.

UNTIL MOVING ON IS A TEMPTATION THAT CAN’T BE DENIED.

I’m not about to claim I’m a genius,
unless we’re talking with a tattoo gun or woman in my hands,
but I’m smart enough to know the beauty serving up my cupcake fix is off limits.

Really, I know.
Too bad the lure of putting a real smile on Kate’s face is so strong.
When she visits Sailor’s Grave Tattoo Parlor,
I can’t help but want to leave my mark.

Grab your copy of MARKED today! 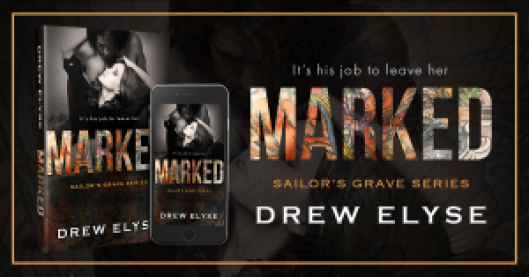 Read an excerpt from MARKED

Christ, I really needed to stop doing this to myself.

Not give up the desserts, because fuck that, but stop torturing myself with the gorgeous woman that served them.

I knew the deal. She was a single mom, widowed a couple years back. She was under the protection of the club because Daz was her late husband’s brother. I also knew that despite conversations I’d overheard about her doing better, about her starting to move on, that she was nowhere near that place.

Maybe it was because I’d been old enough to understand everything as it happened when we’d lost Dad and after. I recognized what the people in her life couldn’t: that she wasn’t moving past a goddamn thing.

It was achingly familiar, seeing that fake smile. It was even more so to see the one she gave her son, knowing that if I were seeing it closer, there would be that lingering sadness behind her eyes that I saw in my mom’s for too long.

And that whole thought process made it sound like I had some fucked Oedipus complex.

There was a cinnamon braid left. That never happened. Sugar’s Dream was more of a dessert place than full-service bakery. The few things Avery made that worked for breakfast were usually snatched up before I ever got there in the afternoons. The cinnamon braid specifically was a favorite at Sailor’s Grave—it was the reason we had an actual kitchen knife in the back after we’d all fallen on one and had to rip off pieces by hand.

“Gotta take that back to the shop,” I told her, pointing to it.

Unable to hide the fact that she was relieved to have a task that involved moving farther away from me to prep a box for it, she jumped right to it. I wasn’t enough of a gentleman to not glance up from considering what else to get in order to take a look while she had her back to me. Kate looked fucking incredible coming and going. I liked a woman with curves, and she was far from lacking in that department. She had light brown hair that danced around her shoulders when she wore it down, porcelain skin that looked like silk, and amber eyes that usually looked brown, but stood out when there was enough light to see them properly.

She was easily the most delicious thing in this goddamn bakery.

She was also the only thing in the place I was sure I wasn’t getting a taste of.

A minute later, she came back with the tied up box, setting it on the counter by the register.

“Anything else?” She tried to avoid my eyes but ended up looking right at my mouth. My cock took notice, fixing to fight for attention.

I was so fucking tempted to answer with something like “a taste test” just to get a rise out of her, but I bit my tongue.

“Two of the lemon cupcakes, one raspberry chocolate, and” —I peeked around her— “are those the mocha ones you’re working on?”

She glanced over her shoulder like she wasn’t sure what she’d been doing when I walked in. “Um…yes.”

Again, it was full hustle to get away from me. I got it. If I were a better man, I might stop coming in. Of course, I’d probably lose it if I tried going cold turkey from my preferred sugar fix, but I could at least talk someone else into coming for me. Jess would probably do it if I bankrolled her own cupcake habit.

Turns out, I wasn’t that good of a person. I wouldn’t push her, but I couldn’t deny myself at least getting to see her beyond just the Disciples’ parties. These little visits were like a fucking drug.

“How’s your boy?” I asked, grasping at anything to get her to talk to me.

“He’s good. He’s telling everyone at his daycare that he’s going to be a biker when he grows up.” It was impossible to miss the love and pride in her voice.

“Probably not a stretch. I wouldn’t be surprised if the brothers had him on his own bike the minute he’s old enough.”

“His dad had a bike, too. Owen’s been around them since he was born.”

I watched as what she’d said registered. I saw her freeze, every inch of her tightening up. She was still facing away, keeping her expression hidden, but I didn’t doubt it was a mix of shock and devastation. I hadn’t known what a minefield the topic was, though I couldn’t be sure I’d have avoided it if it was. Mom told me time and again as she got better that talking about Dad helped, even as much as it hurt.

“I’m sorry. I know that doesn’t help at all. I know it still hurts and all the sympathy in the world doesn’t touch that, but it’s true.”

For a long moment, she didn’t move. I didn’t even see her breathing from my vantage point. Then, she turned around with the box of cupcakes in her hands. She didn’t adopt that benign smile she always had at work, but that didn’t mean she was giving me any glimpse of the real grief.

No, Kate’s face was fucking blank.

It wasn’t my fucking place to try to “help,” especially not while she was at work. Suddenly, if I could take the words back, if I could undo even the reminder of her husband, I’d do it in a heartbeat.

Before I could dig my foot out of my mouth and figure something out to say, she went over to the register and started ringing up my order. “That’ll be $17.56.”

Even her voice was flat, lifeless.

Rather than push and make a bigger ass of myself, I pulled out my card and paid without a word. I kept my mouth shut as she wordlessly handed it back with my receipt, and then slid the boxes toward me.

Only when I had them in hand did she say, again in that dead voice, “Have a nice day.”

Drew Elyse spends her days trying to convince the world that she is, in fact, a Disney Princess, and her nights writing tear-jerking and sexy romance novels.

When she isn’t writing, she can usually be found analyzing every line of a book, binge watching shows on Netflix, doing strange vocal warm ups before singing in a variety of musical styles, or screaming at the TV during Chicago Blackhawks games.

A graduate of Loyola University Chicago, she still lives outside Chicago, IL, where she was born and raised, with her boyfriend and her fur babies Lola and Duncan.

Marked hit me hard, slayed me, broke me, made me smile, broke me again and hit me on a level I never thought that it would but in the end I was glued back together again. This isn’t what I usually read in a book but it seems what usually doesn’t work for me is beginning to work in my favour.

I would love to tell you each and every single tiny detail of this book but it would be crying shame as this is a book that you need to experience without being influenced by my awesome review.

Kate has been a widower for nearly three years, her only shining light is her son Owen otherwise she is faking everything to everyone. I really liked Kate not only because we share the same name. She tries to be strong but it doesn’t always work. Kate felt like a kindred spirit to me.

Liam a tattooist at Sailor’s Grave, and he has carried a torch for Kate. Liam is one of the best Hero’s I have read this year. He is patient, kind, gentle, and hot as f-c-u-k and well I wouldn’t kick him out. He did everything right even taking the blame.

This is a slow burn romance, it’s a journey from friends to being more and then becoming lovers. They kiss at about the 45% mark maybe. They finally get to knock boots at 70% but that is okay for me. I really enjoyed the build-up.

I loved the writing style it captivated me from the beginning especially how the author manages to evoke specific emotions, it flows well, the emotional balance is there. I can only repeat that the story of Kate’s journey overcoming her grief gutted me every single time.

The love that we experience she had with her husband there are flashbacks and they are bittersweet. Kate had to come to terms with it being alright to move on and there were a lot of things that she needed to work through and that only really happened to the end.

Once or twice I felt as if Liam was somewhat in the shadows but if that was to be rectified I wouldn’t know how. But he was there for her every step of the way. He is the ultimate Hero. He gets through to Kate on every level.

It is rare but the book made me cry it was quite embarrassing while I was on the train/tram and trying to keep my sniffles to a minimum.

The pace of the book was spot on.

This is a fantastic start to a brand new series. It has heart, it is grit, it has good and bad times and I’m so glad I took a chance on this author. I am intrigued by the other characters of the Sailor’s Grave tattoo parlour. I want to so very badly read Jess’s story.

Move it to the top of your to be read shelf stat.