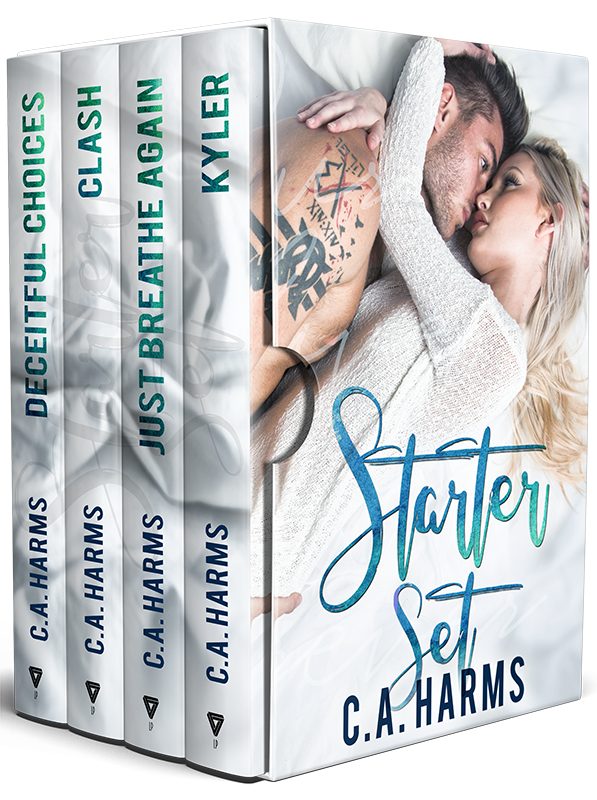 NOW LIVE FOR ONLY 99CENTS!!

A collection of standalone romances by bestselling author #CAHarms…

He was off-limits. Forbidden. My boyfriend’s best friend. I never looked at him as anything more than a friend too.

One unexpected night, one moment of truth, and that imaginary line between friendship and lovers was crossed.

Secrets were shared. Desires fulfilled. There’s no going back now. Our lives were changed forever…

Time will heal me, they say. But they’ve never lived through the loss I have. They don’t know the guilt I carry.

Sometimes I wonder why I even bother waking up every morning. But if I let go, I let go of them. And their memory is all I have left.

I know I need to move on. I know it’s time to Just Breathe Again…

The problem is, I don’t know where to start.

Too much of my life had already been taken away from me by a man that should have protected me. Now, I had broken free of the hate and I was finally getting the chance to feel what true love really was.

But with all good things, bad times seem to follow.

My name is Payton Walters and I refused to allow him any more of my freedom.

I will not fall. Not this time.

Zack had taken a weekend trip with a fellow Navy SEAL to regroup. He’d never intended to find the girl who would jumpstart his heart.

Only then to destroy it.

But the shattered pieces of his trust weren’t the only things he left behind when he walked away from Lindsay.

Some lies you just can’t come back from. The damage is too deep, and Lindsay wasn’t the only one who lied.

But when the truth is told, and those secrets are revealed, they must decide if they have what it takes to survive the deceit.