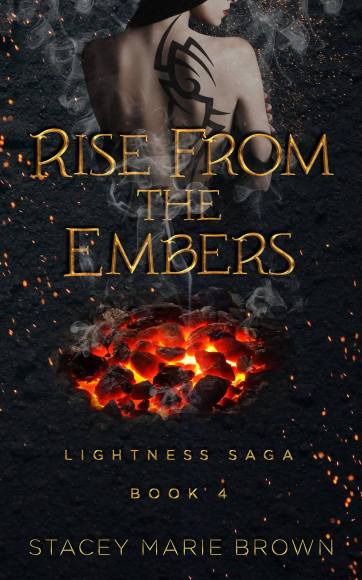 The King has fallen!

While Stavros moves to take over Lars’s throne, the war for the entire kingdom begins. However, this is no ordinary war against Seelie or Unseelie. The real enemy is the most powerful object in the world. The Stone of Fail.

Lars isn’t the only one the stone wants. Zoey Daniels is next on its list. And the stone will do whatever it takes to finally get the girl.

With a battle on all sides and lives of those they love threatened fae, humans, Druids, pixies, and a certain sprite-monkey will have to come together to save the true King, along with the world, from destruction.

Out of ashes, true heroes Rise from the Embers.

Don’t miss the FINAL installment of the Dark/Light/Collector Series, where your favorite characters unite to try and protect those they love, and the earth from the ultimate opponent.

Ember, Zoey, Kennedy, and Fionna lead the fight, but be prepared…

Not everyone will make it out alive.

Stacey Marie Brown is a lover of hot fictional bad boys and sarcastic heroines who kick butt. She also enjoys books, travel, TV shows, hiking, writing, design, and archery. Stacey swears she is part gypsy, being lucky enough to live and travel all over the world.

She grew up in Northern California, where she ran around on her family’s farm, raising animals, riding horses, playing flashlight tag, and turning hay bales into cool forts. She volunteers helping animals and is Eco-friendly. She feels all animals, people, and environment should be treated kindly.