FOR 100 REASONS by Lara Adrian 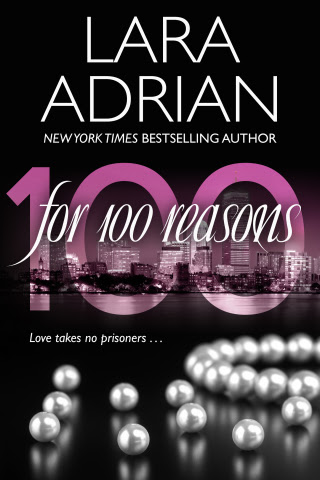 Billionaire Dominic Baine stepped into Avery Ross’s life when it was at its lowest. Obsessed with the beautiful, struggling artist, Nick was determined to have her. What began as a scorching seduction soon burned out of control, exploding into a white-hot passion neither of them could deny.

Yet Nick and Avery are two damaged people, both haunted by dark secrets with the power to destroy them. And for Nick, the ugly past that shaped him cannot compare to the unforgivable deception that drives Avery from his arms, from his life. Now the man accustomed to having everything he desires must find a way to redeem himself to the only woman he has ever loved.

Avery Ross has known heartbreak. She has known betrayal and loss, but nothing like the pain that loving Dominic Baine has brought into her life. Reeling from the aftermath of his devastating revelation, instead of allowing despair to break her, she builds herself into something stronger—the fearless woman and artist Nick’s passion has taught her to be. Yet her heart is in pieces, and despite everything she has, the one thing she needs is the man whose possessive desires and consuming love holds the power to either save them both or shatter her forever . . . .