If You Were Mine, an all-new sexy and emotional standalone from USA Today Bestselling author Melanie Harlow is now available! 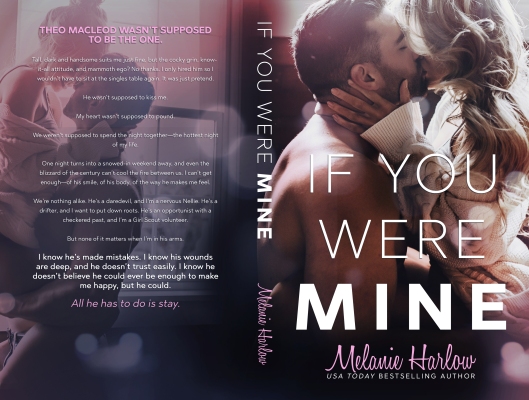 If You Were Mine

Theo MacLeod wasn’t supposed to be the one.
Tall, dark and handsome suits me just fine, but the cocky grin, know-it-all attitude, and mammoth ego? No thanks. I only hired him so I wouldn’t have to sit at the singles table again. It was just pretend.
He wasn’t supposed to kiss me.
My heart wasn’t supposed to pound.
We weren’t supposed to spend the night together—the hottest night of my life.
One night turns into a snowed-in weekend away, and even the blizzard of the century can’t cool the fire between us. I can’t get enough—of his smile, of his body, of the way he makes me feel.
We’re nothing alike. He’s a daredevil, and I’m a nervous Nellie. He’s a drifter, and I want to put down roots. He’s an opportunist with a checkered past, and I’m a Girl Scout volunteer.
But none of it matters when I’m in his arms.
I know he’s made mistakes. I know his wounds are deep, and he doesn’t trust easily. I know he doesn’t believe he could ever be enough to make me happy, but he could.
All he has to do is stay.

A guy in a black leather jacket set a coffee cup down on the table and sat opposite me.

I looked over at him, feeling slightly awkward since I’d have to tell him he couldn’t sit there. He was handsome, with warm brown eyes and short dark hair, but he wasn’t Fred. “I’m sorry, I’m waiting for someone,” I said. “But I can move.”

To my surprise, he smiled confidently. “Claire, right? I’m Fred.”

I screwed up my face. “You can’t be. Fred has blond hair and blue eyes. I saw his picture.”

He laughed, almost condescendingly. “I don’t use my real picture, Claire. People are crazy.”

What? This made no sense. “I don’t understand. How can you advertise yourself with someone else’s photo? Don’t women get mad when you show up?”

He shrugged, his grin turning a little cocky. “Haven’t had any complaints so far.”

Actually, he was more attractive than the photo he’d used online—more rugged and masculine, with his scruffy jaw, big shoulders, and brawny chest. Meeting the real Fred was kind of like ordering the chicken piccata and being brought the Porterhouse, which hadn’t even been on the menu.

But that wasn’t the point.

(And I’d described someone completely different to Elyse.)

“So, what, you use a fake photo to lure potential clients and then you set up the coffee meeting to check them out first?” I asked indignantly.

“Wouldn’t you?” He shrugged out of his jacket. “It’s a scary world out there.”

I crossed my arms, sitting up tall. “No! That’s a scam. I don’t like scammers.”

Frowning, I said, “That doesn’t seem right to me. These people are willing to pay you to hang out with them and probably feel bad enough about themselves already, and you just walk out without even giving them a chance?”

He shrugged. “Look, if it makes you feel any better, I’ve only walked off a job once, and that was because I thought I recognized the woman. I prefer to keep my personal and professional identities separate. That’s fair, isn’t it?”

Professional identity? He was a rent-a-date! I shook my head in disbelief. “Is your name even Fred?”

He grinned as he leaned toward me and lowered his voice. “Call me anything you want. You’re the boss.”

Was he flirting with me or making fun of me? I cleared my throat and pressed my knees tighter together. “I’d like to call you by your actual name, please. Bad enough I have to pay someone to play my fake boyfriend. I’d like something to be real, at least.”

He held his eyes steady on mine for a moment. I felt like he was sizing me up, trying to decide if he could trust me, so I stared right back without blinking. If anyone at this table was trustworthy, it was me.

“Theo,” he said quietly, his eyes dropping to my lips for the merest fraction of a second. “My name is Theo.”

There. Was that so hard? I smiled at him before picking up my latte.“Well, it’s nice to meet you, Theo.”

“What, you’re just going to believe me? You’re much too trusting, Claire. I bet people take advantage of you.”

I set the cup back down on the saucer with an angry clank. “Is your name Theo or not?”

“Shhh, it is, it is,” he said, laughing. Then he glanced over his shoulder like he was in the fucking CIA. “But I don’t give that out to just anyone. You should feel special.” 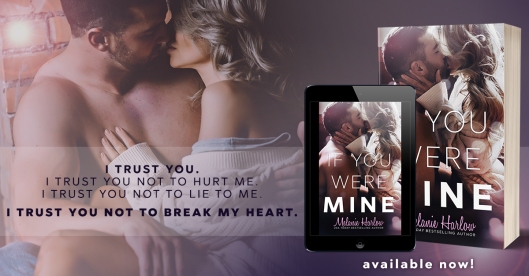 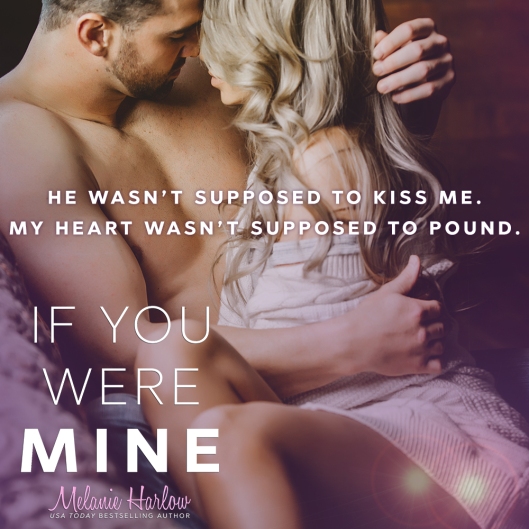 Melanie Harlow likes her martinis dry, her heels high, and her history with the naughty bits left in. When she’s not writing or reading, she gets her kicks from TV series like VEEP, Game of Thrones, House of Cards, and Homeland. She occasionally runs three miles, but only so she can have more gin and steak.

Melanie is the author of the HAPPY CRAZY LOVE series, the FRENCHED series, and the sexy historical SPEAK EASY duet, set in the 1920s. She lifts her glass to romance readers and writers from her home near Detroit, MI, where she lives with her husband, two daughters, and pet rabbit.

If You Were
Mine by Melanie Harlow was my first book by this author and I can assure you,
it will not be my last when the storyline fits.
I was
directly drawn into the writing style of this author, the story captured my
full attention, and that only changed, well when the book ended. The plot was
intriguing and the characters were well developed and interesting.
The story
pace was steady and the depth was sufficient enough to feel real
I am
honestly happy that no one ever came up with the idea of placing me at one of
those dreaded single tables. So often I heard the horror stories about them
that I can honestly fully understand that a girl really would do almost
anything to avoid ending at one of those.
This plot
contains enough light to be a powerful romance and enough darkness to have a
little suspense.
Theo’s (what I would call) “journey” to Claire is not without
setbacks and failures but that is what makes the story believable.
Claire and
Theo were a great couple and I loved accompanying them while their relationship
developed.
Be The First To Share ....