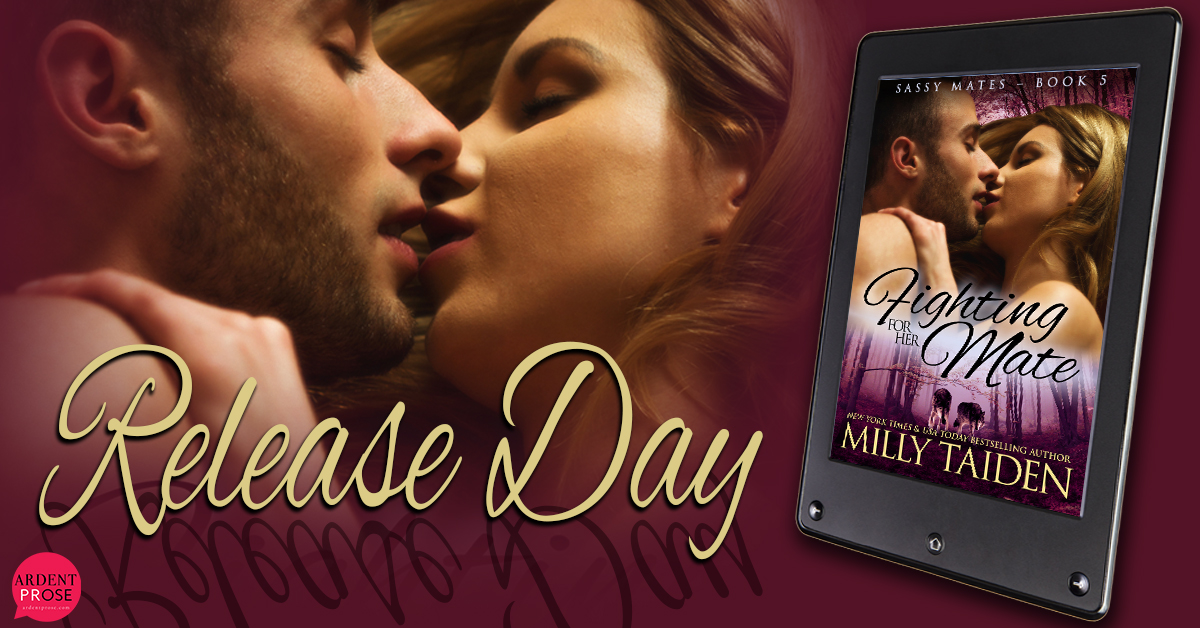 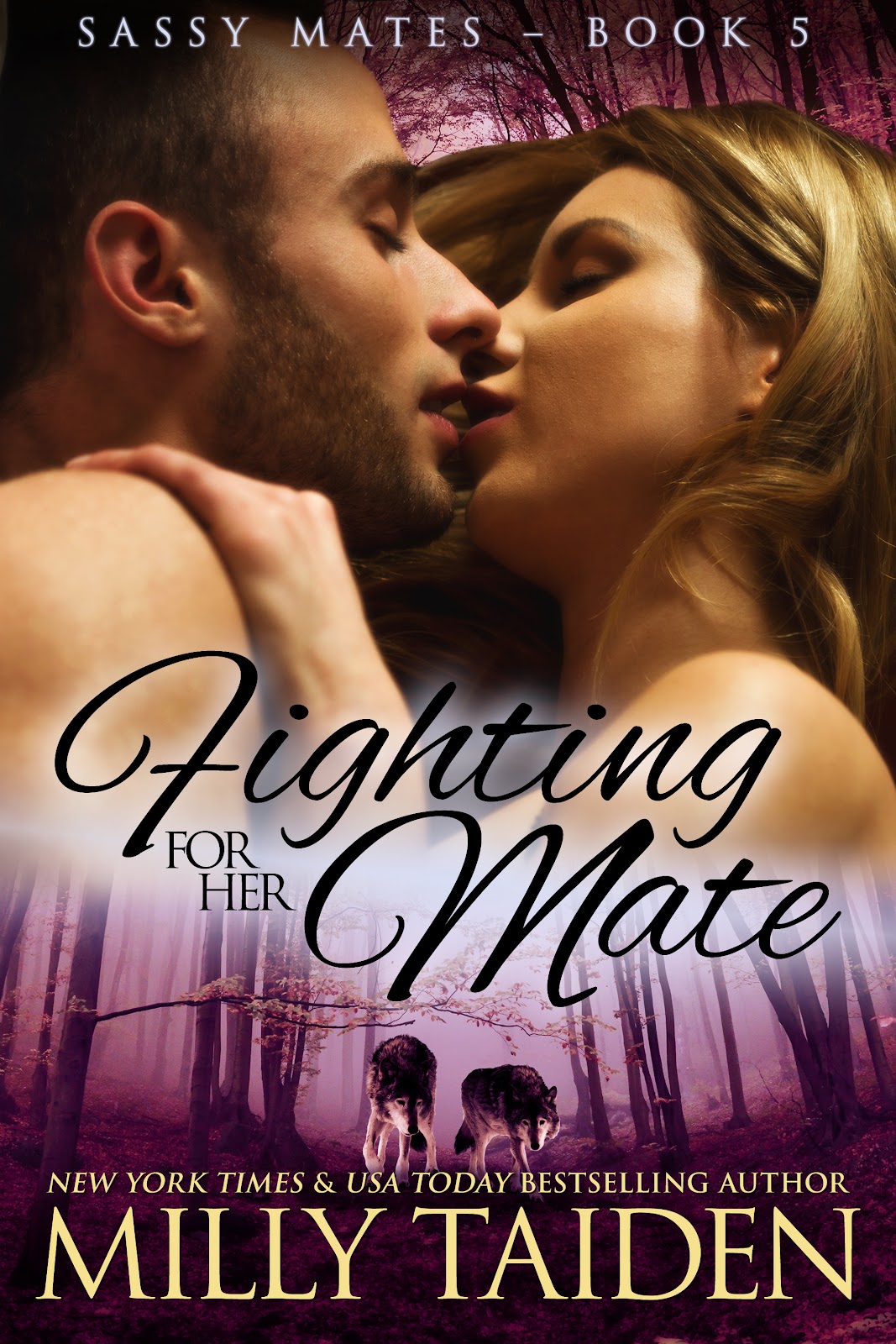 ***Attention readers. This is NOT a standalone book. You really NEED to read the others in the series to finally understand this story. Please take this into consideration before buying.***

Ellie Wolfe has watched her family fight for love and justice. She’s watched the man she loves battle to get his land and his people back. Now, she’s done watching. She will fight for the chance at love and a happily ever after.

Caleb Rahound has been waiting for the right time to bring his uncle to his knees and retake the alpha position rightly his. With his uncle’s plan to hurt the mates, kidnap the babies, and take over the Wolfe pack, he’s got to step up and take charge. Even if that means pushing his mate aside to ensure her safety.

With the help of vampires, rogue wolves, and his friends, Caleb will make a stand and finally try to remove the man destroying his pack. Only the strongest will survive. But Ellie isn’t about to stand by and let her mate fight alone. When the need arises, she’s willing and ready to fight for her mate.
Reading ORDER:

Night of the scenting ceremony.

It was about damn time her brothers got off their shy asses and claimed their mates. Not that Ellie didn’t like the wine and men bashing get-togethers with her girlfriends, but a girl could only take so much stupidity from men. She did love her brothers, but they needed a bit of a push to get them where they needed to be—mated.

Standing on the fringe of the field for the Scenting Ritual, she looked toward the forested hills beyond, while everyone else watched Marco and Kelly center stage. If she and Emma’s plan worked as she hoped, all her friends would finally be on their way to being her brothers’ mates.

Even Emma had a surprise coming. Emma thought she was helping Ellie with Jordan, Nicole, and Karla mating. But Ellie sent Mason out to where the girls were taping the video for a book Jordan was writing. She wasn’t waiting any longer or taking any chances of anything happening.

The situation with the Rahound pack was getting serious. It was best for the women to be mated and for the men to watch over them. The last thing she wanted was for their human bodies to be caught up in a fight with a much stronger shifter. That was one fight her wonderful friends would not win no matter how good they were at defending themselves.

Speaking of the Rahounds, Ellie searched the crowd for her destined mate, Caleb. He was the true alpha of the pack, but his uncle Rocco took control when Caleb’s father suddenly died while Caleb was away. Now that Caleb was of age and ready to lead his pack, Rocco refused to step down. She loved Caleb. Had since the moment she laid eyes on him when she’d been a little girl.

But Caleb was keeping her at arm’s length, and it started to piss her off. He could do so much with her help. Together they could get his pack back and finally move forward with living as they wanted, as a couple.

In the years under the uncle’s rule, the pack had disintegrated into a terrorized community of shifters afraid to speak out or do anything about the abuse they were taking. Now, females from the Rahound pack had been disappearing. It was rumored Rocco was giving women to those loyal to him as gifts for their support. That sick fuck. Every time she thought about how miserable he was making Caleb’s life, she wanted to claw his heart out.

They had no proof yet, but Ellie knew in her gut Rocco was committing heinous acts against his own people. Rocco was a crazy son of a bitch willing to do whatever it took to keep power. Caleb had been planning to challenge his uncle for alpha rights, but the timing wasn’t right yet, or so he kept saying.

Ellie didn’t know the reason for the holdup. But now that a girl was missing from the Wolfe clan, tension was rising, and she didn’t know how long her family would stay out of Rahound’s business.

“Well, hello, my beautiful lady.” A shiver went down Ellie’s back. Rocco’s sour breath at her ear made her stomach roll. She stepped away and turned to face him.

Steeling her spine, she tried to control the venom in her voice. “Hello, Rocco. What do you want?”

A sleazy sneer spread across his face and his eyes raked down her body. She refused to give him the satisfaction of any fear. This self-control was more than just mental on a wolf’s part. Wolves could smell emotional reactions based on the chemicals the brain secreted. Adrenaline of any kind had to be suppressed. Even if all her animal wanted was to slash her claws across his neck and watch him bleed out.

“I’m just stopping by to say hello and see how you are.” His eyes drifted to her chest. “My darling, you are far too beautiful to waste on my nephew. How about you come to the alpha house for dinner. I’ll make sure my enforcers are there to watch,” his tongue slid between his lips, “over you.”

He shouldn’t even be there. This was a private ritual, but clearly someone had informed him and he’d taken it upon himself to come. The area was available to all who wanted to wander, but Rocco knew neither he nor his men were guests. Ellie put on a fake smile. “I’d see you in hell before I willingly went anywhere with you.”

Rocco chuckled as if she’d said something cute. “You’re so like your mother. She was a spitfire, too. Definitely a nice piece of ass in her time.”

Ellie gasped then hauled back and slapped him. Fury tensed her muscles. “Don’t you speak of my mother or anyone in my family.” Her voice lowered to a growl and she fought hard to keep the wolf in check. “Just because yours is fucked up doesn’t invite you into ours. We have something you never will, Rocco.” He stretched his jaw, a red splotch forming on his cheek.

“And what is that, my nephew’s whore?”

She narrowed her eyes. Then she smiled and spoke slowly. “Respect and love from our pack.”

His eyes darkened. Ellie smelled his hate as the breeze swept it away.

“Ellie?” her mother called out. A second later, her parents and Caleb joined her. Caleb wrapped his arms around her from behind, staring at his uncle over her head. “Rocco,” he said with steel in his voice. “I didn’t think we’d see you here.” He hugged Ellie a little tighter and kissed the top of her head. “Is everything okay, Ellie?”

She relaxed in his hold. “Everything is fine. Your uncle and I were discussing our packs’ loyalties to their alphas. Or lack of.” He gave her a little squeeze. She wasn’t sure if it was his way of cheering her on or warning her off. Probably warning her off, knowing him. He didn’t want her getting involved in anything to do with his uncle or the pack war. Too fucking bad. She was his mate and she wasn’t sitting by, letting him deal with it alone. Not when he wasn’t alone, he had her.

Ellie’s dad and mom stopped beside them. Her dad shook hands with the piece of shit. “Rocco.”

He looked her dad in the eye and gave a short nod. “Tristan.” Then he grabbed up her mother’s hand and brought it to his lips. The nerve of that sick bastard to touch her mother. “Barbara. It’s always nice to see you.” His snake eyes focused on her. She took her hand back quickly, a frown marring her face.

Ellie was shocked her dad wasn’t all over Rocco, beating him into the ground. On second thought, Dad was sure in Mom’s love for only him. As she glanced at her father’s face, he seemed a bit smug. What was that all about?

Her father wrapped an arm around her mom’s shoulders and cleared his throat. “So, Rocco. Have you noticed an increasing amount of rogue wolves in the area lately?”

Rocco pursed his lips and drew down his brows; a fake contemplation expression if ever she saw one. Whatever came out of his mouth would be a lie. They all knew it.

“Now that you mention it, one of my enforcers may have mentioned seeing a strange face, but nothing other than that. Are these rogues perhaps only in your territory?” His disinterested tone went against the spark of revulsion in his eyes.

Her dad’s brow lifted. “Could be. We should all be watchful. We don’t want them straying into your area either. With you being the interim alpha until Caleb takes over, we wouldn’t want you to have to deal with an issue as touchy as this.”

Caleb’s body stiffened around Ellie. She had to stop her jaw from dropping open. She couldn’t believe her father egged Rocco like this. Rocco shoved his hands into his pockets. The stench of hate escaped into the air. Being this close together, it could’ve come from any of them.

Within the crowd, someone called out Rocco’s name. He excused himself and headed away. Ellie readied to burst. As much as she loved how strong and tough her family was, she didn’t want anyone inciting the asshole further. “Dad, oh my god. You were intentionally goading him.”

Her mother chuffed. “He’s lucky that’s all your father did. Arrogant bastard.”

Her dad wrapped her mom close and kissed her forehead. “Don’t waste mind space on him.” He looked around. “Where are your brothers? They need to be front and center to represent the pack.”

Both Ellie and her mom reacted too quickly, each starting to talk then stopped when realizing how they just blew the cover to Operation Get the Brothers Mated. They giggled at each other. Her dad lowered his head against his mate’s. “Don’t tell me. I don’t want to know, do I?”

Ellie reached for her mom’s hand. “It’s a girl thing, Dad. But we promise, you’ll be an even happier father soon.”

Caleb and her father groaned.